Tatawaw (welcome, there is room here for you). PÎYÊSÎW WÂSKÂHIKAN is our first dedicated Indigenous space. This room is the culmination of years of community feedback. We heard that Indigenous customers of all ages wanted a place to connect to ceremonial teachings and Indigenous languages. Feel free to take a virtual tour. Our Elder-in-Residence, Nôhkom Jo-Ann Saddleback works out of PÎYÊSÎW WÂSKÂHIKAN. To schedule a visit with her check out our Elder in Residence page and for her contact information and direction on providing protocol.

The revitalized Stanley A. Milner Library is located on Indigenous lands. It's important for Indigenous people, like myself, to see ourselves reflected in this physical space. We also see a consistent appetite for programing on reconciliation, treaty implementation and shared history from non-Indigenous customers who want to learn how we can live well together.

The name gifted to this space by Elders Jo-Ann and Jerry Saddleback translates to Thunderbird House. This name is in nêhiyawêwin (Plains Cree), one of the languages indigenous to Edmonton. The name is depicted in both standard roman orthography and syllabics on the sign because there are two ways to write nêhiyawêwin. There are sounds within nêhiyawêwin that don’t exist in English but an approximate phonetic way to say this name is PEE-YE-SOU WAASK-A-HIGAN. Or listen to this audio recording to learn how to pronounce PÎYÊSÎW WÂSKÂHIKAN.

Syllabics are ancient writing system gifted to nehiyawak and contain spiritual powers and the name in syllabics will be depicted on the south-facing windows in an vinyl artwork by Muskeg Lake Cree Nation artist Joi. T. Arcand. Thunderbirds are an important deity to nehiyawak (Plains Cree people) and are still in relationship with buffalo who sustained life for prairie Indigenous people for thousands of years. 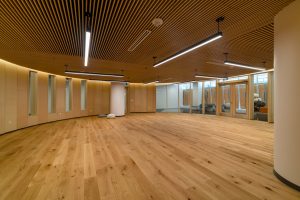 We worked with Elders, and intensively with Nôhkom Jo-Ann on the design of the space that is in accordance with nehiyaw (Cree) philosophies from the materials to the orientation of the room.

The wood on the floors, walls and ceiling is all poplar. This is a significant tree to nehiyawak since it is the first tree that grew in this Treaty Six territory. Poplar is also the tree used for the sundance lodge. The wall paneling has small perforations that insulate outside sound, making the space very peaceful.

The entrances are on the south and east sides of the room as per nehiyaw protocols. The ribbons hung on the east door are part of the protocol given to our Library CEO, Pilar Martinez to ask for the name of the space and blessing of the Library. Nôhkom Jo-Ann has shared that the east door is a healing door.

For most prairie Indigenous peoples, prayer takes place sitting on the ground or floor, close to the earth. The rock chairs allow for people to sit in this grounded fashion. Rocks for many Indigenous peoples are relatives, are animate in our languages, and are used in sweats. A sweat is a purifying ritual that uses intense heat to stimulate vision and insight.

It is also the first public space in Edmonton built for smudging. The room has its own HVAC system so with a flip of the switch folks can smudge in here without worry of setting off the alarm system. Smudging is a burning of medicine (sweetgrass, cedar, sage, fungus, etc.) that is then washed over someone (themselves or by someone else). This serves as both a cleansing and transport of prayers to above. Smudging is a component of Indigenous ceremonies, as well as an act done when an individual or small group prays together. Western science has now asserted that smudging does indeed cleanse the air and has medicinal properties.

We obviously opened the Stanley A. Milner Library under different circumstances than we thought we would be. Our locations are open, but we are still mainly offering online events and classes. In the near future, the space will be used for Indigenous ceremonies, classes and events. It is a sacred space that we welcome you to come sit in and enjoy. EPL is a community-led library which means that we work collaboratively with the community to determine how to best serve you. The development of PÎYÊSÎW WÂSKÂHIKAN and how the space is used has been and will be led by you, our community.