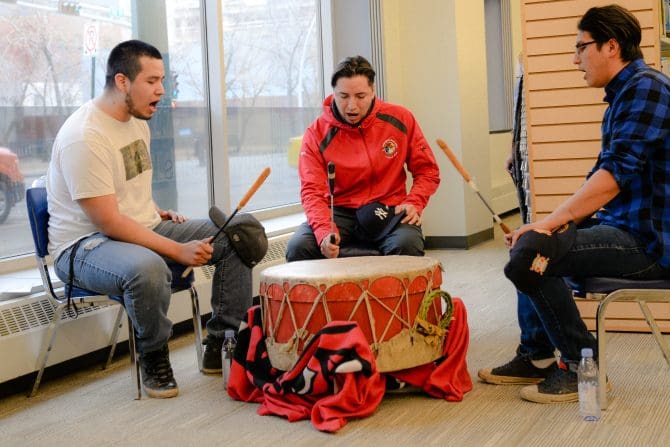 This day exists because of the demands of Indigenous peoples for recognition including a call in 1982 for the creation of a National Aboriginal Solidarity Day. In 1996, Canada declared June 21 National Aboriginal Day, which was renamed National Indigenous Peoples Day in 2017. The new name is apt because we are peoples, with distinct nations cultures, languages and ceremonies and should be recognized as such.

June 21 is also the longest day of the year, which is a significant time of year for Nêhiyawak and other peoples in this area. This season is marked by many ceremonies and gatherings. In some ways this is our new year, but in other ways, we are constantly in a state of renewal.

Edmonton has always been a gathering place, where trade and ceremonies occurred. Public libraries are gathering places for people and ideas. It is important that we celebrate and be in solidarity with Indigenous peoples throughout the year.

If you are interested in learning more about Indigenous peoples and cultures, I encourage you to check out the library and community resources listed below and visit our Indigenous page for more information.

Voices on the Rise Film Screening and Discussion 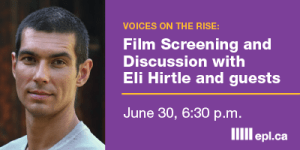 On Thursday, June 30, we are hosting a film screening of two new episodes of Voices on the Rise — a docuseries about the power of Indigenous languages to revitalize culture and identity. Following the screening, those who were featured in the episodes will join us for a panel led by the filmmaker Eli Hirtle, including our Elder-in-Residence Jo-Ann Saddleback, Elder Jerry Saddleback, Quin Buck and Emily Riddle. If you are unable to attend, the episodes are all available online. 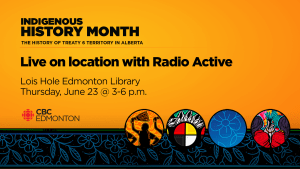 This week, CBC will be at various EPL locations to celebrate National Indigenous History Month and showcase the history of Treaty 6 Territory, including doing a live taping of CBC Radio Active at the Lois Hole (Callingwood) Branch on Thursday, June 23 from 3 p.m. to 6 p.m.  CBC has created several maps of the Treaty 6 Territory to celebrate and learn more about Indigenous culture and history, which can be viewed at the event or at Indigenous history on Treaty 6 territory in Alberta | CBC News.

Voices of the Land

Voices of the Land is a digital space that supports communities to create, share, discover and celebrate Indigenous content online, in accordance with Indigenous ways of sharing information. It is an expansion of the Voices of Amiskwaciy project which was launched by EPL in 2017.  It was developed by libraries throughout Alberta with support from the Government of Alberta’s Public Library Services Branch. This work is guided by a steering committee from libraries across the province. It is the culmination of collaboration with Elders, Knowledge Keepers and community members. 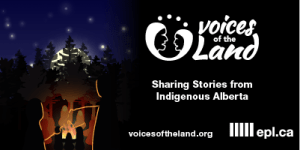 Check out the digital storytelling series created by the M.D. of Opportunity #17 hosted on the site. It features profiles of many Elders from Treaty 8 Territory. 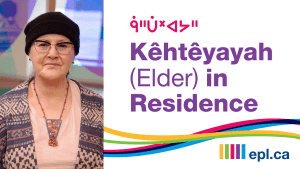 EPL is incredibly blessed to have Nôhkom Jo-Ann Saddleback as our Elder in Residence. She has asked us to call her Nôhkom, which means “my grandmother” in Nêhiyawêwin. This puts us in direct kinship with her and she has graciously offered to be everyone’s grandmother at the Library, both customers and staff.

Nôhkom Jo-Ann is available to meet with customers who are looking for cultural guidance. We also host regular Pîkiskwêtân with Nôhkom Jo-Ann sessions in PÎYÊSÎW WÂSKÂHIKAN and will be announcing new programming very soon. For more information, visit the Elder in Residence page.