The Edmonton Public Library’s Elder in Residence Program (EIR) provides access to an Indigenous Elder for EPL customers. The Elder in Residence hosts weekly classes and programs centred on Indigenous knowledge and work to ensure that ceremony is an active part of our library system. Through classes, events and ceremonies, we bring together people from all backgrounds to learn about Indigenous culture, protocol and processes.

About the Elder in Residence 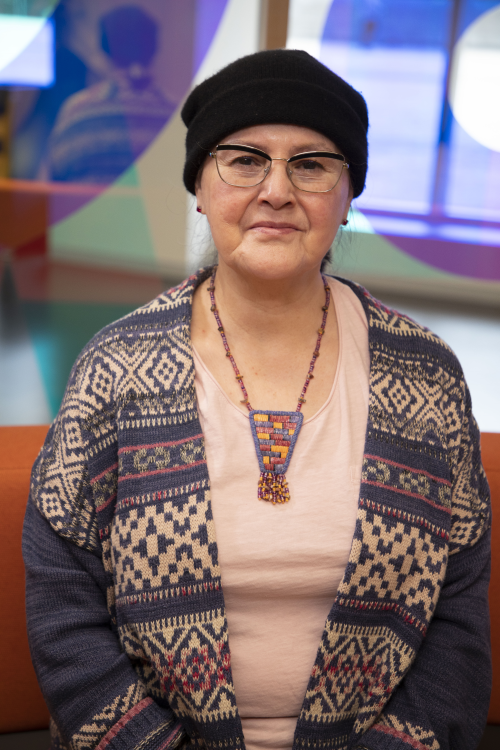 Jo-Ann Saddleback is a member of the Saddle Lake Cree First Nation. Her husband, Jerry Saddleback, is from the Samson Cree Nation and they have 11 children between them. Jo-Ann worked as a Policy Analyst/Researcher for various organizations and Executive Director for Metis Settlements General Council heading up Legal and Governmental Affairs. She also spent 30 years as a community developer, travelling across Canada developing and delivering workshops for RCMP, Corrections Canada, Alberta Health and Alberta Justice. As part of this work, she visited Old People in First Nations and Metis communities. They initiated her to ceremonies and evaluated the teachings she shares in communities. Jo-Ann remains grateful they entrust her to continue work sharing their wisdom.

Jo-Ann has participated in a number of special projects over the years, including:

She is a frequent guest speaker at conferences and works as an Elder for other groups including Alberta Justice, City of Edmonton, Edmonton 2 Spirit Society, the University of Saskatchewan Project on addictions and Canadian Research Initiative on Substance Misuse (CRISM).

In her other life, Jo-Ann is an Elder Artist, writer, and designer at her Store Câhcacêp Art and Tea House, recently closed and now manages Câhcacêp BowsArt with her husband. Together they travel throughout Treaty 6 territory when invited to share the History of Creation Story.

Have questions about EIR?

Nôhkom Jo-Ann works out of PÎYÊSÎW WÂSKÂHIKAN in the Stanley A. Milner Library. Sharing her knowledge, Nôhkom is helping guide the work of our staff, leading classes and ceremonies, and connecting with community members. She hosts open drop-in visiting hours in PÎYÊSÎW WÂSKÂHIKAN. The times for these visiting sessions can be found here. If you are coming to ask questions about culture or ceremony, you are asked to bring protocol, which includes tobacco. If you cannot make any of these times or have further questions about protocol or the Elder-in-Residence Program, we ask you to request a meeting and staff will be able to guide you.

Elder Jo-Ann and her husband, Jerry Saddleback, have a longstanding relationship with the Library. They were instrumental in the design of PÎYÊSÎW WÂSKÂHIKAN (Thunderbird House), the Indigenous gathering space at the Milner Library. In particular, Elder Jo-Ann provided support on its design in accordance with nehiyaw (Cree) philosophies. She and her husband gifted the name to the space in a Pipe ceremony in August 2020.

PÎYÊSÎW WÂSKÂHIKAN (Thunderbird House) is our first dedicated Indigenous space that is built for ceremony and gatherings.

View more about Elder in Residence