Father’s Day is a special time of the year. It is when young children bring home crafts from school - a hastenly scrawled on card featuring a cartoon of a guy sacked out on the couch, or mowing the lawn, but Father’s Day is more than that. It’s is a time for us fathers to reflect on what it is to be the man known as Dad.

Children look up to their “superdad” who has it all figured out. They look up to us as an example of strength, wisdom, and leadership, and then there’s…reality. A reality filled with misunderstandings, forgotten school events, and rushed meals as we herd the family out the door to make it on time to swimming lessons. It’s a reality of difficult conversations, barking orders and throwing up of hands in the air as our limits are constantly being tested. But through it all there is always love.

Being a father is a messy role filled with many imperfections. Every year, I celebrate those imperfections with films that show the many sides of fatherhood and this year is no different. 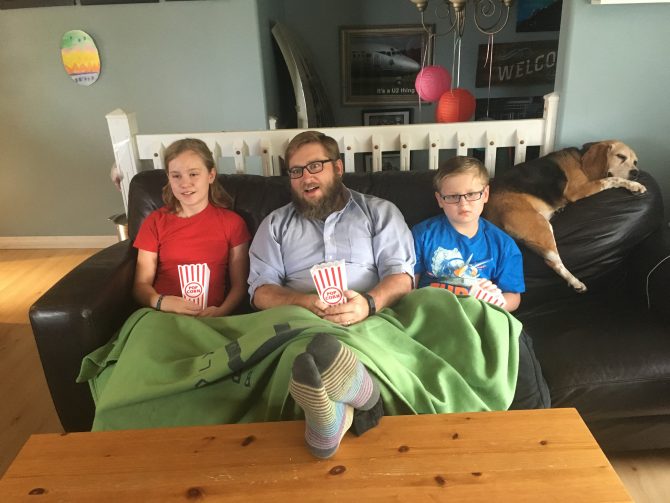 The heartwarming story of a father who is trying to reconnect with his long lost son. Okay, maybe not quite, but think about the roller coaster ride that Vader is on: he discovers he has a son; gets attacked by his son (yes, Luke makes the first move); offers to bring his son on board at his work; son would rather drop down a 20 story shaft than join him. Ouch.

Marlin is the quintessential “helicopter parent”. He is extremely protective of his son and is afraid to let his son Nemo out of his sight. Of course when Nemo goes missing, Marlin panics and goes off to search without much of a plan. Riddled with guilt, Marlin has a hard time accepting help from others as he struggles with equal parts concern for his missing son and self-loathing for his perceived failure as a father. For an animated fish, Marlin is all too real.

Remember the days before you had kids? All that free time to run around the city catching bad guys and foiling evil plots. We’ve all been there, right? Ah, those were the good old days. Now there are bills to be paid, teachers to meet with, and ridiculous squabbling at the dinner table that makes you wish for your glory days. Well The Incredibles are here to show that the glory days are yet to come, when you can celebrate your victories as a family and when you realize that your children have become heroes in their own right, and you will need their help to save the day.

After the kids go to bed

(not recommended for family viewing)

How would you deal with going on a holiday journey just you and your child to the sea? Now, replace “holiday” with a death march through a post-apocalypse world filled with raiders, cannibals, and radiation. Just you try to hold back the tears as you witness a father’s struggle to remain moral in an immoral world, while demonstrating absolute devotion to his child.

As fathers we want our children to succeed, but what happens when that success comes early? Royal Tenenbaum knows best. His world is crashing around him.  His grown children are suffering from having peaked so early and have nowhere to go but down. They have come back to confront their father who was less than nurturing as he pushed them toward success, and even profited from them.

Royal is looking for a way to reunite with his family, but his plans only seem to lead to deeper and deeper disaster. Sometime as fathers, we try so hard without realizing we haven’t a clue what we’re doing. We lie awake at night thinking, “What am I doing wrong?” Then we see the Tenenbaum family and say, “Well, I guess my families not that messed up.”

We promise ourselves that we are going to be the best fathers we can be, but what does that even mean? Gil Buckman wants to be the man of the house - the provider, the one whose kids are “normal” and “well adjusted.” Gil wants a perfect family without any mess. But when his drive to perfection turns to neurosis, and life continues to make a mess of his neat, ordered idea of what family should be, Gil reaches his breaking point. This is a comedy based in reality, where we laugh, but guardedly, as the punchlines frequently hit close to home.