Steven Sandor is the editor of Avenue Edmonton. His ninth book, Spin Out, was published by Lorimer this autumn. 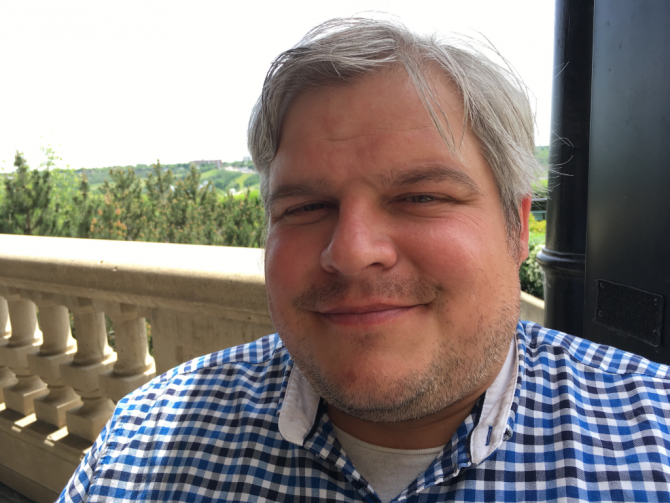 Fear is the most primal of emotions. It’s fear that tells us we shouldn’t get too close to the edge. Fear warns us not to go out when the thunder rumbles. Fear makes sure we keep our doors locked at night. It’s the emotion that’s most closely tied to self-preservation.

But, for some of us, being scared is well, kinda fun. Whether it’s a surge of adrenaline from something that went bump in the night, to a deep feeling of dread that lasts for days, humans are attracted to fear. Being scared makes us hyper-aware of our surroundings. We can hear our hearts pounding in our ears. We can measure every breath we take. And our body releases more chemicals than a drugstore.

Let the Right One In

Read John Ajvide Lindqvist’s book AND see the film. This may be the best vampire story of them all—set in a sterile Stockholm suburb. There’s a teenage vampire, who depends on a serial killer to provide it with the blood it needs to survive. There’s a love story with the bullied boy next door. It’s a story that makes you put your morality aside; there isn’t good or evil, just varying shades of grey. And, in both the film and the book, the already cult-classic swimming-pool scene is one of the most tension-filled bits in the history of horror fiction. You will never see a public pool the same way again.

Let the Right One In is available as a book, DVD and streaming video.

The Thing and Alien (double feature)

You need to watch them back to back. Both the John Carpenter remake of this horror classic and Ridley Scott’s re-think of The Thing, set in space. Whether you’re on a lonely spaceship that’s light years from home (Alien), to an Arctic outpost (The Thing), there’s something horrible about being in a terrifying place with nowhere to run. What’s absolutely worse than being hunted? Being alone, with no chance to call for help. Both films see isolated crews get picked off one by one. And no one, I mean no one, in the history of movies dies any better than Yaphet Kotto does. I mean “dying like Yaphet Kotto” should be taught in acting schools.

The Thing is available as a DVD.

Alien is available as a DVD and Blu-ray disc.

The final 15 minutes of Hereditary are so shocking, so bizarre, that you’ll be thinking, “What the hell just happened?” as the credits roll, if you aren’t curled up in the fetal position, that is. For most of this movie, you’re suckered into thinking that this is some sort of dark, creepy film about a family in crisis, but that’s not it all. There’s a second dark plot that’s unfolding in the background, and it’s OK if you miss it on the first viewing. When you watch it a second time, you’ll pick up on the sinister clues you missed the first time around.

Hereditary is available as a DVD and Blu-ray disc.

This movie scared the living wits out of me when I was a kid. My parents took me to see it, thinking this was a Disney film, so what was the worst that could happen? But the late 1970s was a time where everyone wanted to make a movie that competed with Alien, so the studio put out a film about a space station at the edge of Armageddon, patrolled by a red robot named Maximilian who had shredders for arms. After seeing this movie, my older brother would make a buzzing sound like an electric eggbeater, move his hands back and forth as fast as he could, cry “It’s Maximilian” and chase me around the house. My brother and I still talk, surprisingly.

The Black Hole is available as a DVD and streaming video.

It’s not out and out jump-out-of-your skin scary, but this period piece sticks with you. It will make you feel like you've made some sort of contract with dark forces, that the fate of your soul might hang in the balance. It takes you back to the time of the Salem Witch Trials, with a simple twist—that the witches WERE real. A family knows that there are forces out there in the woods, but they can’t see that the real evil is much, much closer than they know. Possible fallout from the film: next time you see a goat in a petting zoo, you’ll run away screaming.

The Witch is available as a DVD and Blu-ray disc.

While he’s not famous for being a horror writer, and Lullaby is not nearly as well-known as his hits like Fight Club and Invisible Monsters, this creepy Chuck Palahniuk book is worth revisiting. The hero of the story learns a culling poem; that is, whenever he recites the lines, the person he thinks about...dies. It asks the tough question, no matter how good a person you are: if you had the power to kill with your mind, could you contain yourself? Or would you become a monster, no matter how hard you tried not to kill the person who just cut you off in traffic?

Lullaby is available as a book, eBook and downloadable audiobook.

Richard Matheson’s classic short story can be found in the Stephen King-edited collection, Flight or Fright. For anyone who’s a Twilight Zone aficionado, there’s no question the top episode in the show’s history was “Nightmare at 20,000 Feet” where a young William Shatner sees a monster on the wing of the plane he’s in. Problem? No one else can see the creature. It’s based on Matheson’s short story, in which we don’t really know if a passenger’s fear of flying is causing him to hallucinate, or if there really is a monster out there. Read it and you’ll be glancing at the wings the next time you fly—and every time after.

Flight or Fright is available as a book, eBook, audiobook CD and downloadable audiobook.

Let’s face it, surgery scares a lot of us. The idea of being put into a deep sleep while sharp objects root around your insides is, well, unsettling. And Canadian filmmaker/writer David Cronenberg really understands this. The outlandish red surgical outfits and bizarre instruments made his film Dead Ringers just, well, chilling. And, in this novel, Cronenberg plays on surgery as an almost sensual experience, a sort of ballet of tubes and scalpels and such.

Consumed is available as a book and eBook.

A boy goes to sleep and doesn’t wake up. A family wracked with guilt is haunted by demons and spirits. A clairvoyant who specializes in finding nasty demons. None of these themes were really new, but the film does oh so well to capture a rising feeling of dread. Never has a simple house alarm been used in a scene with such terrifying effect.

Insidious is available as a DVD.

Of course, we finish with the classic. It’s been almost 60 years since this was on theatre screens, but the shower scene is still required viewing for all film buffs. This is a delicately layered film—and, if you can clear your mind, you can imagine what this might have been like to watch without any spoilers. You think you’re watching a film about a woman embezzling from her employer, and then it takes this absolutely freakish turn once she stops for the night at the Bates Motel. I can only imagine how the moviegoers on opening night dealt with the plot twists.

Alfred Hitchcock’s Psycho is available as a DVD.

Looking for even more horror flicks to watch this Halloween? Try Kanopy, an online streaming service that's free with your library card!