The transformation of the Stanley A. Milner Library is hard to miss. Sitting on the south end of Churchill Square, the Edmonton Public Library’s central branch looks dramatically different a mere four months in to what will be a three-year revitalization, opens a new window. 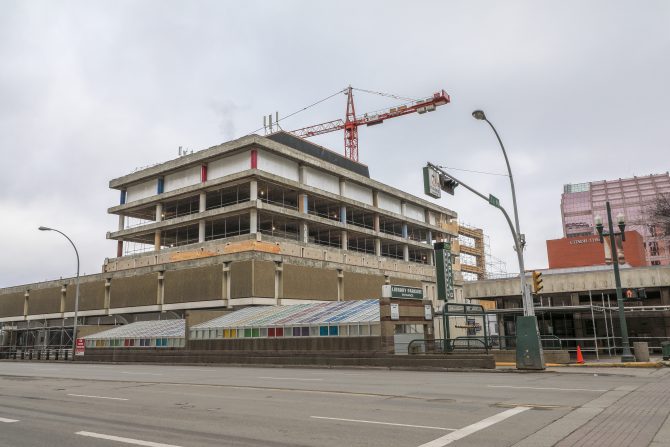 In April, a group of new Women Building Futures students were lucky enough to see the progress from a different perspective during a tour.

Women Building Futures, opens a new window is a leader in trades training for women. According to Susan Roussel, Program Facilitator and Team Lead, between 4-6 % of trades workers are women Canada-wide.

“The tour is valuable because the students can see firsthand what they will be doing on the job site,” said Roussel. “It’s crucial for them to have these types of experiences in the program.” 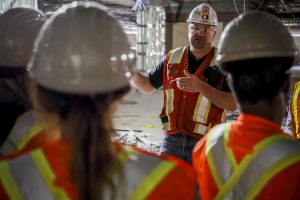 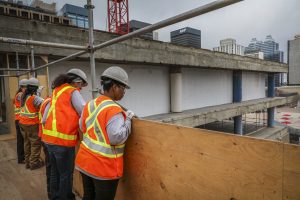 Working with Clark Builders, EPL organized the tour of the $69 million project. Of course, renovating a 230,000 square foot library is no small feat.

Prior to closing the doors in December 2016, 3,500 hours were spent packing and moving 162,000 books, DVDs, CDs, Blu Ray discs, video games and magazines – some to the temporary location at Enterprise Square, opens a new window and some to other branches. There were also 332 computers redistributed to other branches.

Beyond that, the project also involves removing 10,000 light bulbs, as well as 1,219 metric tonnes of exterior concrete that will be recycled for road construction.

The sights and sounds of tradespeople is consistent, and is something Women Building Futures student Tashina Saddleback would have noticed even if she hadn’t received an invite inside.

“Every time I see a site, I stop and look up to see what the trades are doing,” said Saddleback, who now has a particular interest in ironwork after going to school to be a paralegal.

“Today’s site visit was amazing. I asked about ironworkers and got a feel for the types of schedules they work. I just want to start today! It’s very eye opening.”

It was many of the students’ first time on a construction site, which is a key part of the hands-on focus of the Women Building Futures program.

“I like the idea of getting into project planning in my career; I was amazed by the planning and complexity that goes into the building process,” said student Alizah Bright, who wants to work outdoors and is aiming for a career in carpentry. “When you’re inside the site, it’s more exciting and you see the complexity.

“I’m excited to be a worker on a site, sign in every day and see a project beginning to end.” 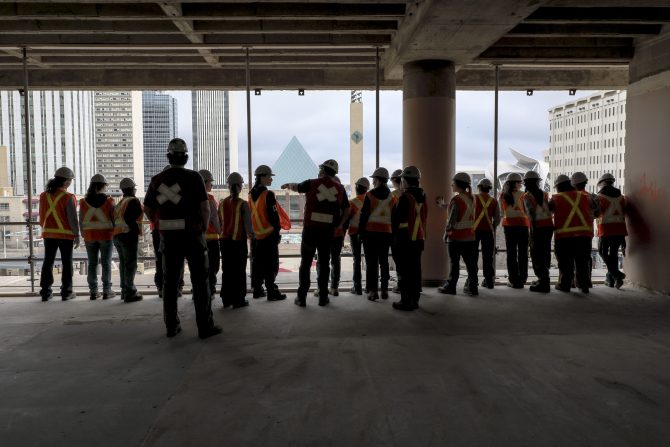 And while these visits were quite different than the 1.2 million the Milner Library receives each year, the tour was a look behind the scenes at a project that will help shape the downtown core and better facilitate the needs of the community.

“They would love to come back and see it through the stages,” said Roussel.

Take a look at the Milner Live Cam!