Women continue to be underrepresented in politics world-wide. In Alberta, they represent only 29% of elected officials in the provincial legislative assembly. A variety of barriers stand in their way of achieving full gender parity, including online harassment and generalized misogyny.

On Thursday, June 10, EPL hosted a virtual conversation with Rajan Sawhney, Janis Irwin and Laurie Blakeman that was moderated by CBC Radio’s Tara McCarthy. They discussed how they got involved in politics, the successes and challenges they experienced along the way and their suggestions to work towards a better future for women in politics. 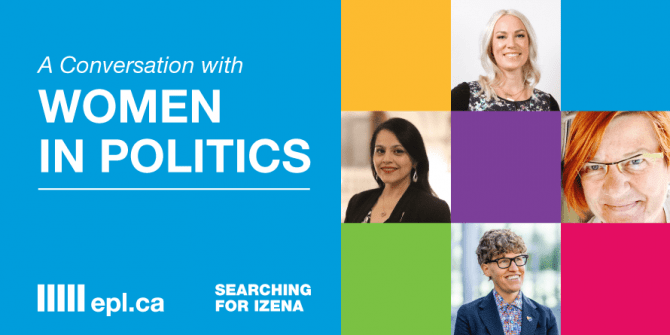 It was a fantastic discussion and participants appreciated the open and honest conversation amongst the three women as they supported each other, acknowledged their privilege (even in the face of many challenges) and were united in wanting to make more space for racialized and LGBTQ2S+ women in politics.

To see a replay of the event, check out our recording.

If you’re interested in this topic, we also suggest checking out the Searching for Izena podcast, which is a collaborative effort between YWCA Edmonton, Parity Yeg and some excellent local guests who’ve worked in and around municipal politics. This is a grassroots project to commemorate the centennial of Izena Ross, the first woman elected to Edmonton City Council.

Still have questions? You can find more titles in our collection about women in politics around the world. And you can always chat with our knowledgeable staff to find more on the topic!