Today is the National Day for Truth and Reconciliation, or Orange Shirt Day. As such all EPL locations are closed for the day for staff and customers to reflect. 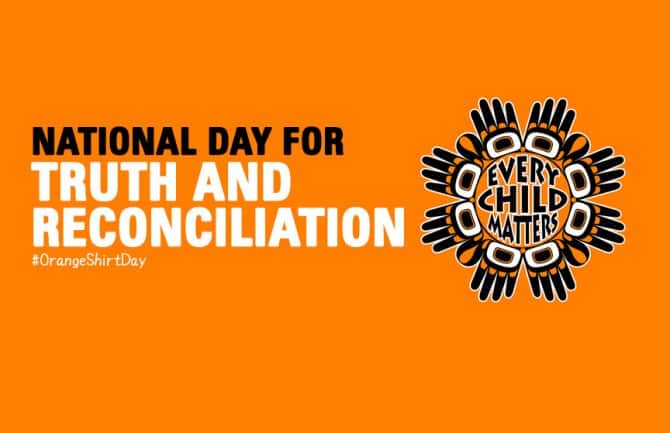 For Indigenous people, this is a day of mourning and should be respected as such. This day is intended to honour stolen children and the survivors of residential schools. This is not history as the legacy of residential schools lives within every Indigenous person you meet. If you want to break a people, you take their children from them. Many people are still finding their way home and many will never get the chance to.

The Government of Canada has designated September 30 as the National Day for Truth and Reconciliation and passed legislation making it a statutory holiday for federal public service employees. This was one of the 94 Calls to Action in the Final Report of the Truth and Reconciliation Commission (TRC) of Canada. The TRC was the result of the Indian Residential Schools Settlement Agreement, the largest class-action settlement in Canadian history. Survivors requested some of the settlement funds be used towards public hearings and historical documentation.

In September, Orange Shirt Day has long been commemorated, which is a legacy of the St. Joseph Mission residential school commemoration event, held in Williams Lake, B.C., in the spring of 2013. It was inspired by Phyllis (Jack) Webstad's story of having her shiny new orange shirt taken away on her first day of school at the Mission. Since then, it has become an opportunity to keep the discussion on all aspects of residential schools happening annually and to symbolically show support for survivors and intergenerational survivors.

More than 38,000 children attended residential school in Canada and the bodies of more than 1,800 children have been recovered in the last year at gravesites near these schools. This is a history that has long been spoken about in Indigenous communities, but is recently becoming known for others. There is work at multiple former residential school sites in Alberta to identify the true number of remains, though no official results have been released. The work to honour these children whose lives were taken in schools is ongoing.

For nehiyawak (the Plains Cree), children are revered and are to be respected as sacred and sovereign beings. In reaction to the findings at the Kamloops Residential School, Our Elder-in-Residence, Jo-Ann Saddleback wrote:

"When people ask what the word for “child” is in Cree, we say, Awâsis, but it doesn’t mean “child”, rather it means “Little Skybeing that was loaned to us in the most holy, sacred way”. K’se Manito (Kind Compassionate Creator), Himself, dictated that is how we are to treat His children. Residential schools were the policies of a government bent on “killing the Indian in the child”. Reconciliation demands we not give up on or hide the truth or make it nicer."

As nehiyawak, kinship is among our most important teachings. One of the most destructive things about residential schools is how they fractured our extended kinship systems, which were the core of our governance. When an Indigenous person asks you “where are you from?” it is because we are trying to determine how we are related. When we entered into a Treaty relationship with non-Indigenous people through Treaty 6, we took each other on as kin. On this day, I hope we can reflect on how to be in better kinship with each other.