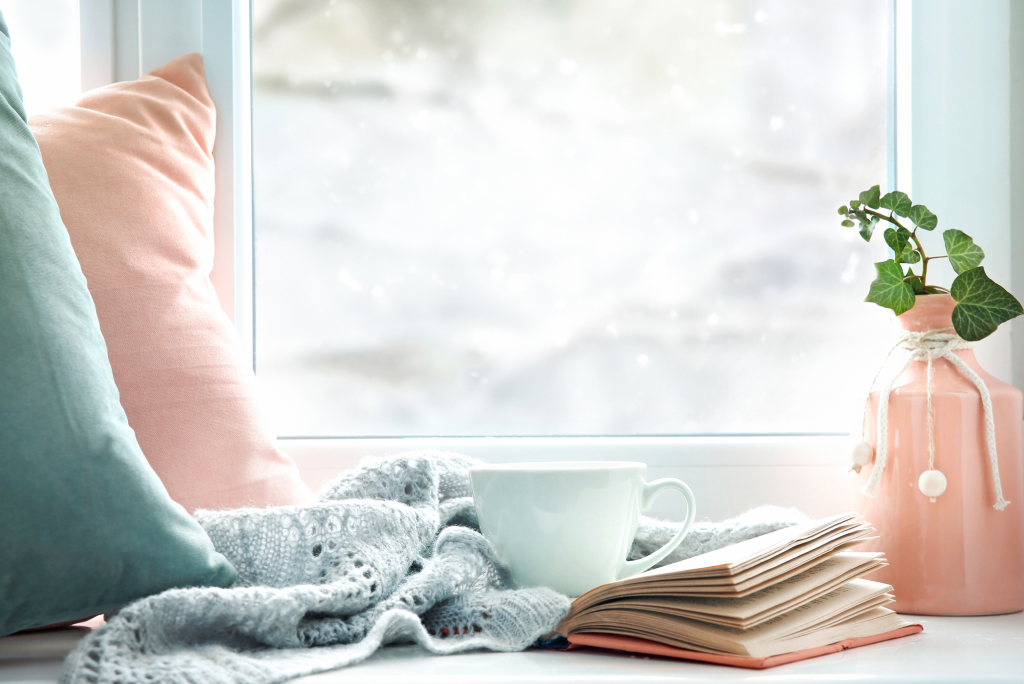 Edmontonians borrow over 11 million items from the Edmonton Public Library every year—that’s a lot of books (and movies and music and games)!

But what are Edmonton residents actually reading?

From buzzy new titles to perennially popular picks, we've looked at some of the fiction and non-fiction books with the most library holds in 2019 and made suggestions for what to read while you wait for your turn. (And if you’re interested in discovering more popular titles at EPL, see our Top Holds blog posts from Spring 2019 and Fall 2019.)

Browse these titles now for FREE with your library card. Don’t have one? Sign up online.

From the publisher: "Raina wakes up one night with a terrible upset stomach. Her mom has one, too, so it's probably just a bug. Raina eventually returns to school, where she's dealing with the usual highs and lows: friends, not-friends, and classmates who think the school year is just one long gross-out session. It soon becomes clear that Raina's tummy trouble isn't going away . . . and it coincides with her worries about food, school, and changing friendships. What's going on?”

What to Read Instead: Small Things by Mel Tregonning

A wordless and beautiful visual story about a young boy’s struggles with anxiety, and how he finds support when he talks about his worries.

Small Things is available as a book.

From the publisher: "Soon after her twenty-fifth birthday, Libby Jones returns home from work to find the letter she's been waiting for her entire life. She rips it open with one driving thought: I am finally going to know who I am. She soon learns not only the identity of her birth parents, but also that she is the sole inheritor of their abandoned mansion on the banks of the Thames in London's fashionable Chelsea neighborhood, worth millions. Everything in Libby's life is about to change. But what she can't possibly know is that others have been waiting for this day as well—and she is on a collision course to meet them.”

What to Read Instead: The Death of Mrs. Westaway by Ruth Ware

The wealthy Mrs. Westaway has died. Harriet Westaway (unrelated) receives a letter by mistake, informing her of her substantial inheritance. Planning to use her people skills to claim the money, she discovers that there’s something off about the Westaway family and the inheritance.

The Death of Mrs. Westaway is available as a book, eBook and audiobook CD.

From the publisher: "In the small north Florida town of Seabrook, a young lawyer named Keith Russo was shot dead at his desk as he worked late one night. The killer left no clues behind. There were no witnesses, no real suspects, no one with a motive. The police soon settled on Quincy Miller, a young black man who was once a client of Russo's. Quincy was framed, convicted, and sent to prison for life. For twenty-two years he languished in prison with no lawyer, no advocate on the outside. Then he wrote a letter to Guardian Ministries, a small innocence group founded by a lawyer/minister named Cullen Post. Guardian handles only a few innocence cases at a time, and Post is its only investigator. He travels the South fighting wrongful convictions and taking cases no one else will touch. With Quincy Miller, though, he gets far more than he bargained for. Powerful, ruthless people murdered Keith Russo, and they do not want Quincy exonerated. They killed one lawyer twenty-two years ago, and they will kill another one without a second thought.”

What to Read Instead: The Defense by Steve Cavanagh

Defense attorney Eddie Flynn must win an indefensible case in which a Russian mob boss is on trial for murder, or his own ten-year-old daughter will be killed. What’s more, he’s only given 48 hours to do so.

The Defense is available as a book.

From the publisher: "An unexpected inheritance gives Greg Heffley’s family a chance to make big changes to their house. But they soon find that home improvement isn’t all it’s cracked up to be.”

What to Read Instead: The Brilliant World of Tom Gates by Liz Pichon

If you enjoy the Diary of a Wimpy Kid series, you’ll love this diary-style graphic novel by Liz Pichon. Tom Gates is the British version of Greg Heffley, spending his class time drawing and writing, pestering his older sister and coming up with excuses for forgetting his homework.

The Brilliant World of Tom Gates is available as a book and audiobook CD.

From the publisher: "Reacher is on a Greyhound bus, minding his own business, with no particular place to go, and all the time in the world to get there. Then he steps off the bus to help an old man who is obviously just a victim waiting to happen. But you know what they say about good deeds. Now Reacher wants to make it right.”

What to Read Instead: Orphan X by Gregg Andrew Hurwitz

The first in a series of thrillers about Evan Smoak, a highly skilled assassin who’s been trained since childhood to help those with nowhere else to turn. Now known only as the Nowhere Man, someone’s on to him—someone who’s familiar with the secretive Orphan X program.

Orphan X is available as a book, eBook and large print book.

1. Top Hold: The Body: A Guide for Occupants by Bill Bryson

From the publisher: "Bill Bryson takes us on a head-to-toe tour of the marvel that is the human body. He guides us through the human body—how it functions, its remarkable ability to heal itself, and (unfortunately) the ways it can fail. Full of facts (your body made a million red blood cells since you started reading this) and anecdotes, The Body will lead you to a deeper understanding of the miracle that is life in general and you, in particular.”

What to Read Instead: Human Errors by Nathan H. Lents

Ever wondered why our bodies have so many seemingly useless features (like extra bones in our wrists)? Professor of biology, Nathan H. Lents explains our evolutionary history with an entertaining tour of the human body and all its quirks.

Human Errors: A Panorama of Our Glitches, From Pointless Bones to Broken Genes is available as a book, eBook, downloadable audiobook and streaming audiobook.

From the publisher: "In this instant New York Times bestselling account of violence and espionage, Pulitzer Prize-winning investigative reporter Ronan Farrow exposes serial abusers and a cabal of powerful interests hell-bent on covering up the truth, at any cost.”

What to Read Instead: Nobody's Victim by Carrie Goldberg

Victims’ rights lawyer Carrie Goldberg shares the ways her clients have been harassed and assaulted, how she’s fought for them in the courtroom and how to recognize the types of offenders she encounters most often.

Nobody's Victim: Fighting Psychos, Stalkers, Pervs, and Trolls is available as a book and eBook.

From the publisher: "[Wong] shares the wisdom she's learned from a life in comedy and reveals stories from her life off stage, including the brutal singles life in New York (i.e. the inevitable confrontation with erectile dysfunction), reconnecting with her roots (and drinking snake blood) in Vietnam, tales of being a wild child growing up in San Francisco, and parenting war stories. Though addressed to her daughters, Ali Wong's letters are absurdly funny, surprisingly moving, and enlightening (and disgusting) for all.”

What to Read Instead: Girl Walks Into a Bar by Rachel Dratch

Like Wong, Rachel Dratch is a comedian who shares stories from her personal and professional life, including her unexpected pregnancy and motherhood.

Girl Walks Into a Bar: Comedy Calamities, Dating Disasters, and a Midlife Miracle is available as a book and downloadable audiobook.

From the publisher: "In Duchess at Home—a beautiful new cookbook from the founder of Duchess Bake Shop—Giselle Courteau draws on her French and French-Canadian heritage to share the food she loves to make most for her family at home. Warming soups and stews, hearty breads, and flavourful preserves fill the pages of this beautiful volume—plus, of course, plenty of recipes for her delicious sweets and desserts—from tourtière to tarte au fraises, and everything in between. With chapters for breakfast and lunch, French favourites and Quebecois cuisine, dishes for Christmas and special occasions, and even recipes inspired by the produce in Giselle's own garden, this is a cookbook that you'll turn to for inspiration all year long.”

What to Read Instead: Edmonton Cooks by Tina Faiz

Bring the local culinary scene to your kitchen with over 75 recipes by Edmonton chefs. Test out classic and contemporary recipes, get cooking tips and enjoy the beautiful photos of mouth-watering eats.

Edmonton Cooks: Signature Recipes From the City's Best Chefs is available as a book.

From the publisher: "No matter your goals, Atomic Habits offers a proven framework for improving—every day. James Clear, one of the world's leading experts on habit formation, reveals practical strategies that will teach you exactly how to form good habits, break bad ones, and master the tiny behaviors that lead to remarkable results.”

What to Read Instead: Stick With It by Sean Young

An expert in behavioural science, Dr. Sean Young explains why changing our habits can be so difficult and provides ways to “neurohack” our brains to avoid counter-productive behaviours.

Stick With It: A Scientifically Proven Process for Changing Your Life—For Good is available as a book, eBook, audiobook CD and downloadable audiobook.

Looking for something different? We’ll pick you a new favourite. We love books, music, movies and video games—and we can help you find stuff you love too! Let us know what you’re into by filling out the form linked below. We’ll create a hand-picked list just for you.