Even though June has come to an end along with Pride Month, we wanted to share some of our favourite LGBTQ2S+ characters with you to encourage you to keep adding more inclusivity to your movie stack or bookshelf even after June ends. 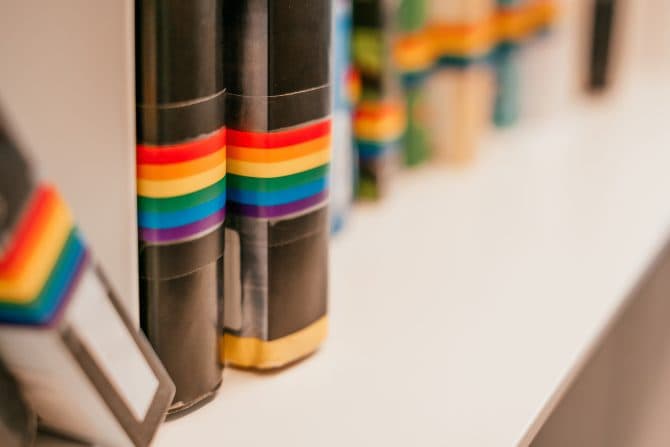 1. The entire main cast from Dungeon Critters by Natalie Riess

“Not a single straight character among them! I was originally drawn to this book because of the adorable art. It's basically a super queer D&D (Dungeons & Dragons) story, with character arcs for each teammate and plenty of shenanigans to keep you entertained. I can't pick any one character because really it's the team as a whole and their friendship with each other that makes the comic what it is.” — Levi Hayes, Page at the Riverbend Branch

2. Vita from Crowded by Christopher Sebela

"She's a bodyguard for hire in a universe where you can put a bounty on anyone by crowdfunding their assassination. Vita has a very particular system, and it is often at odds with the desires and whims of her most recent client, Charlie. In fact, Charlie often does things that put herself in easy firing range of her would-be assassins, and Vita is forced to be more proactive in protecting her. Their bickering dynamic and total opposite personalities make for a delightful read, as does their growing friendship as the series progresses. What really makes it is the detail of the facial expressions and body language brought to life by the artist of the series. — Levi Hayes, Page at the Riverbend Branch

Crowded Volume 1 is also available as an eBook.

"I love Brokeback Mountain because of the way that it brings my family together. My father-in-law was a production manager for the film. He's a straight, white, cis man in his 60's but any time he talks about it, he tears up. Every time he cries, I cry too. He will forever admire the way small town Alberta rallied around this big gay film on the locations where it was made. It was 2005, so a lot of people were originally reluctant to say that they were working on it, but now it's become a point of pride and a beloved film." — Lydia Holmes, Library Assistant at the Stanley A. Milner Library

Brokeback Mountain is also available as a Blu-ray Disc.

"Bex is a hilariously witty trans character played by a trans actress, and it’s refreshing to see her presented and accepted as just another one of the girls in her friend group." — Arianna Biasini, Library Assistant at the Woodcroft (Westmount) Branch

5. Jake and Devon from Chucky

"Don Mancini, creator of the infamous killer doll Chucky, has shared in interviews about the series that he wrote Jake’s storyline to reflect his own experiences growing up as a gay teenager. It’s sweet to watch Jake and Devon’s relationship develop amidst the mayhem of trying to stop Chucky’s latest murder spree in their otherwise quiet hometown. An honourable mention also goes to Chucky himself for being a solid ally and embracing gender diversity in the bodies he possesses and inhabits." —Arianna Biasini, Library Assistant at the Woodcroft (Westmount) Branch

“Psycho Goreman (or PG for short!) is a made-in-Canada space monster who attempts to destroy the universe, gets imprisoned for millions of years on Earth, then is unwittingly released by a couple of kids who help him learn important lessons about friendship and discover a newfound appreciation for hunky boys in the process. What’s not to love?” — Arianna Biasini, Library Assistant at the Woodcroft (Westmount) Branch

“Less by Andrew Sean Greer, the wistful and funny 2017 Pulitzer Prize winning novel about author Arthur Less, who is turning 50, and trying to navigate mid-life and and a flagging writing career” — Nancy Porteous, Manager in the Collections Management & Access Division

Less is also available as an eBook and a downloadable audiobook.

"The Heartstopper series by Alice Oseman features multiple LGBTQ2S+ characters, but centers on Charlie Spring, a boy who was accidentally outed as gay by a classmate and experiences bullying at school, and Nick Nelson, a rugby lad who soon realizes that Charlie is becoming much more than just a friend.

A sweet, feel-good love story released first as a web comic and later as graphic novels and two supporting novellas. Season one of the TV adaptation was released in May on Netflix, collected a record-breaking amount of views and so much feedback from fans that Netflix has renewed the show for two more seasons." — Crystal Downey, Library Assistant at the Lois Hole (Callingwood) Branch

9. Jonathan from A Peculiar Peril by Jeff Vandermeer

"Jonathan Lambshead, the main character is asexual and it is brought up in the best casual way in the book. Friend to Jonathan, Danielle Rackham, is bisexual. The characters are written so perfectly that it doesn't feel forced at all. The story is a mix of dark fantasy with some really great gore scenes, mixed with historical and fantastical fiction." — Suzie Hess, Library Assistant at the Whitemud Crossing Branch

A Peculiar Peril is also available as an eBook and downloadable audiobook.

If these titles don't get you excited to keep Pride Month going, feel free to check out some of our ongoing events and other book lists.