Freedom to Read Week (Sunday, Feb. 19 to Saturday, Feb. 25) is an annual event that encourages Canadians to think about and reaffirm their commitment to intellectual freedom.

Whether you're an educator, student or member of the community, there are lots of ways you can help mark this annual event! 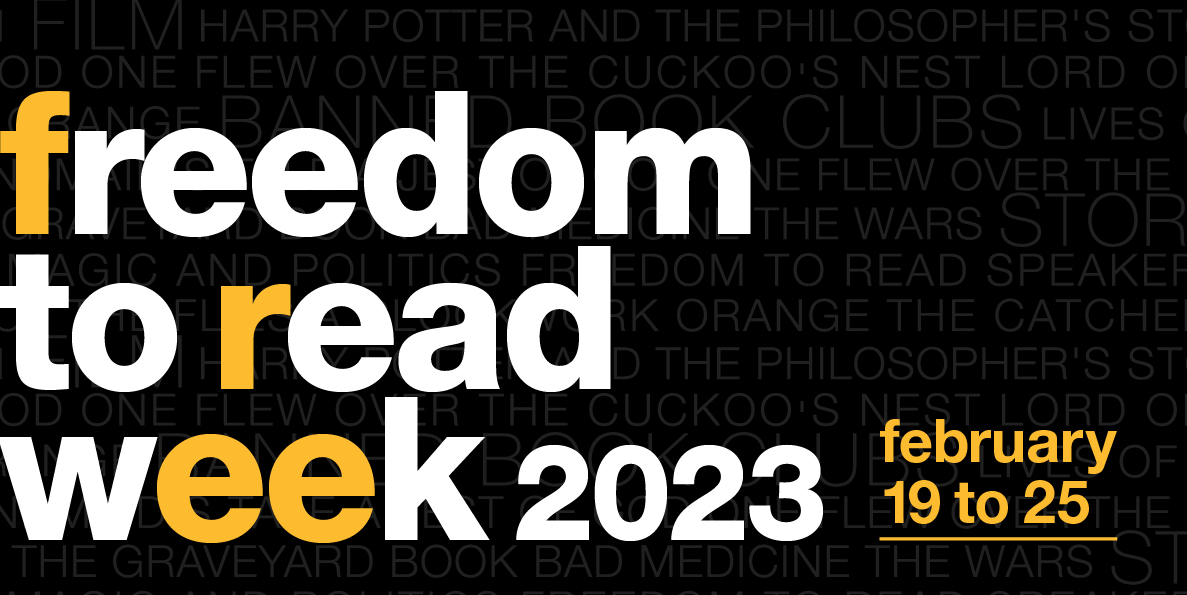 A Conversation with Art Spiegelman 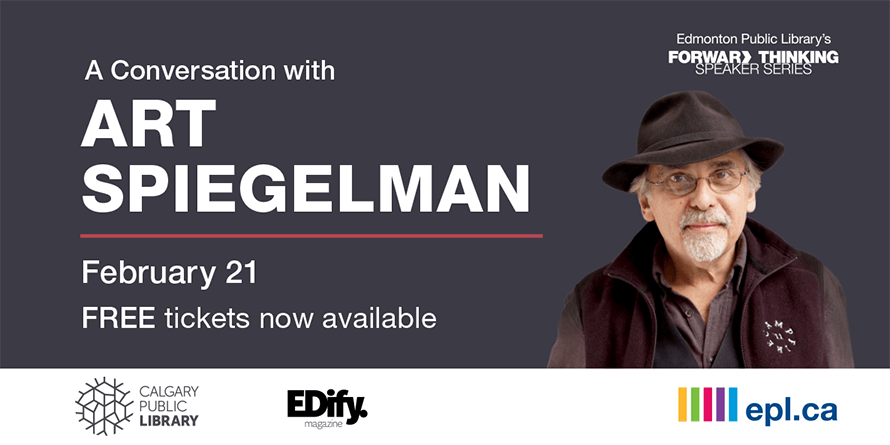 Art Spiegelman has almost single-handedly brought comic books out of the toy closet and onto the literature shelves. In 1992, he won the Pulitzer Prize for his masterful Holocaust narrative Maus— which portrayed Jews as mice and Nazis as cats. Maus II continued the remarkable story of his parents’ survival of the Nazi regime and their lives later in America. Spiegelman believes that in our post-literate culture the importance of the comic is on the rise, for “comics echo the way the brain works. People think in iconographic images, not in holograms, and people think in bursts of language, not in paragraphs.”

Hear from the Pulitzer Prize-winning artist on February 21, during the first Forward Thinking Speaker Series event of 2023, “A Conversation with Art Spiegelman”. During this moderated event, Spiegelman will discuss his career, the recent banning of Maus by some schools and his art.

This virtual talk is presented during Freedom to Read Week which encourages Canadians to think about and reaffirm their commitment to intellectual freedom. “A Conversation with Art Spiegelman” is presented in partnership with Calgary Public Library.

Having rejected his parents’ aspirations for him to become a dentist, Art Spiegelman studied cartooning in high school and began drawing professionally at age 16. He studied art and philosophy at Harpur College before becoming part of the underground comix subculture of the 60s and 70s. As creative consultant for Topps Bubble Gum Co. Spiegelman created Wacky Packages, Garbage Pail Kids, and other novelty items, and taught history and aesthetics of comics at the School for Visual Arts in New York. In 2007 he was a Heyman Fellow of the Humanities at Columbia University where he taught a Masters of the Comics seminar.

Spiegelman co-founded RAW, the acclaimed avant-garde comics magazine, with his wife, Françoise Mouly—Maus was originally serialized in the pages of RAW. He and Mouly also co-edited Little Lit, a series of three comics anthologies for children published by HarperCollins (“Comics-They’re not just for Grown-ups Anymore”). He and Mouly started Toon Books publishing easy to read comics for children. They co-edited the anthology A Toon Treasury of Classic Children’s Comics published by Abrams.

Maus was called “the first masterpiece in comic book history” by The New Yorker. It has received several awards including the Pulitzer Prize, the Angoulême International Comics Festival Best Foreign Album Award, the Eisner Award, and the Los Angeles Times Book Prize for Fiction. In 2009 it was chosen by the Young Adult Library Association as one of its recom-mended titles for all students. In 2020 the New York Public Library voted Maus: A Survivor’s Tale one of the 125 most important books of the last 125 years. He wrote Meta Maus, a companion to The Complete Maus – about why he wrote Maus. MetaMaus was awarded the 2011 National Jewish Book Award, and a 2012 Eisner Award.

This event will be moderated by author, Sandra SG Wong. 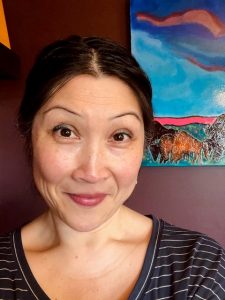 Sandra SG Wong (she/her) writes fiction across genres, including the cross-genre Lola Starke novels, Crescent City short stories, and the bestselling standalone thriller, In The Dark We Forget. A Crime Writers of Canada Awards of Excellence finalist & Whistler Independent Book Awards nominee, as well as a speaker, mentor, and hybrid author, Sandra currently chairs the DEIJB Advisory Committee for Sisters in Crime, and is an active member of Crime Writers of Color. You can join her Reader Group via http://eepurl.com/hl79sj.

Freedom to Read Week is celebrated every year during the last week of February, a time when we are encouraged to reflect on intellectual freedom. Upholding the community’s right to read is a year-round responsibility at libraries. Books are challenged and even banned in Canada and around the world.

Internationally acclaimed author, Lawrence Hill, discusses how his own writing was challenged and shares some of his favourite banned books.

Books, magazines, newspapers and other materials are challenged and banned in Canada and around the world all the time. Each challenge has sought to limit public access to materials in schools, libraries or bookstores.

Even the Edmonton Public Library has received challenges to material in our collection which you'll see in the lists below.

With over 260,000 Edmontonians enjoying our services regularly, our customers come from a rich mixture of cultures, representing over 36 countries from around the world, each holding a diversity of opinions and beliefs. One of the vital community roles the library plays is to protect the Intellectual Freedom of our many customers, including yours.

"Libraries have a core responsibility to safeguard and facilitate access to constitutionally protected expressions of knowledge, imagination, ideas, and opinion, including those which some individuals and groups consider unconventional, unpopular or unacceptable. To this end, in accordance with their mandates and professional values and standards, libraries provide, defend and promote equitable access to the widest possible variety of expressive content and resist calls for censorship and the adoption of systems that deny or restrict access to resources." — Canadian Federation of Library Associations

EPL strongly supports this statement and supplies a wide range of materials allowing for individuals to use them without obstruction and to develop their own informed opinions and ideas.

"Intellectual Freedom is the right of every individual to both seek and receive information from all points of view without restriction. It provides for free access to all expressions of ideas through which any and all sides of a question, cause, or movement may be explored. Intellectual freedom encompasses the freedom to hold, receive, and disseminate ideas." — American Library Association 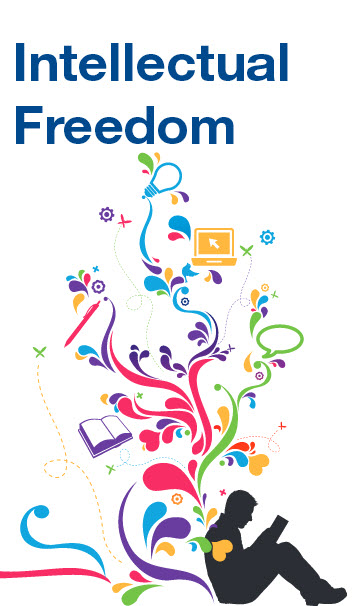 What will I find at EPL? Expand

Walk into any branch and you'll find a wide range of books, CDs, DVDs and other materials. We don't condemn, endorse or advocate controversial materials on our shelves. Nor do we mark or identify materials to show approval or disapproval of the contents. Why? Because it's your "right to know." It's your right to use these materials freely and to develop your own informed thoughts and opinions.

How does EPL select books and other materials? Expand

All materials at EPL are selected based on the following criteria:

We also take into account the expertise, comprehensive treatment of a subject, clarity and representation of different points of view (including extreme or minority points of view).

Our team of Collections Librarians follow EPL's Collection Development Policy to ensure that we have a healthy and balanced collection.

What if there are materials in the library that I don't like? Expand

If you think we should not have a particular item on our shelves, or that an item should be relocated within the collection, you can request reconsideration of materials by filling this form.

All requests from customers are taken seriously and will be answered.

If you believe there are better materials available expressing certain viewpoints, you can make suggestions for new items at any branch or on our website.

Do my kids have access to all library materials? Expand

Yes, your child's card provides access to all material in our library, however, children under the age of 18 must have permission from their parents or guardians to get a library card. Parents and guardians are the best judge of what their children should or should not read and can regularly review their borrowing activity. We recommend that you have discussions with your children about what is appropriate for them to read, listen, view, and play.