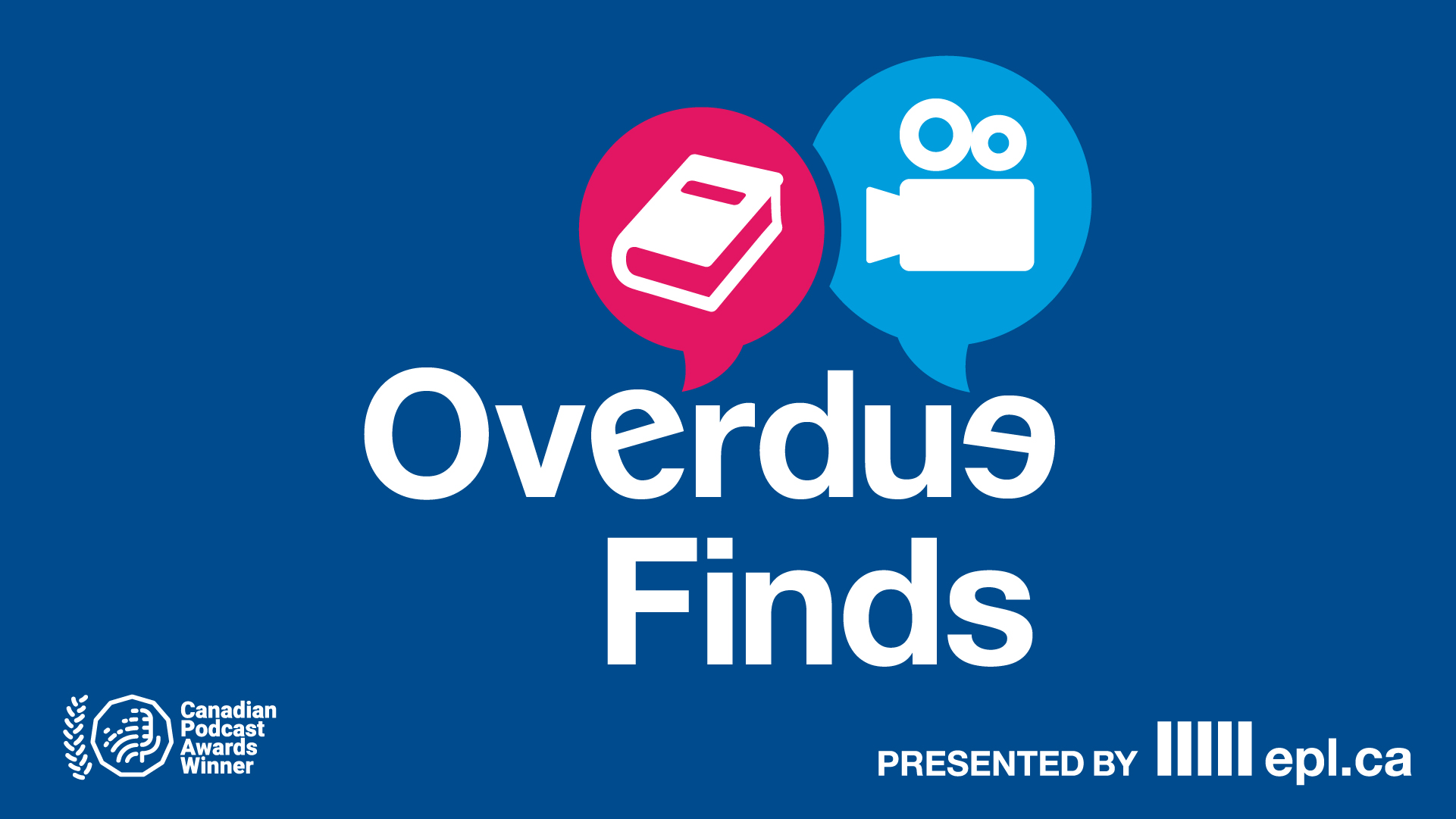 Our podcast is lucky to have so much support from EPL staff who are frequent guests on the show and work behind the scenes on the podcast. During each episode of Overdue Finds, we ask our guests to name a movie, album, book or video game that they've recently enjoyed. We asked staff and other guests this year to share their own top "Overdue Finds" from 2020 that you can borrow for free from EPL. In no particular order, here are our 13 top picks!

1. AI: The Somnium Files on Playstation 4

A mystery is all about the details, and that's what AI: The Somnium Files gets right. This overlooked title from the creators of the Zero Escape series has you solving a series of murders by diving into people's minds to look for clues. But which details are real, and which are products of dream logic and false memories? Meanwhile, even a throwaway joke could be the key to a breakthrough. Nothing is wasted, and the player is consistently rewarded for paying attention. - Davis G. See, opens a new window, writer and guest on Episode 67: Interactive Storytelling, opens a new window.

AI is available on Playstation 4.

It’s a great old-school Agatha Christie-type murder mystery, where the story is told by different members of a wedding party stuck on a deserted island, and you don’t even know which of them is the victim and what secret got them killed until the very end! Lots of great twists and turns and atmosphere. - Meg DeForest, Community Librarian and guest co-host on Episode 61: 35th Anniversary of Back to the Future, opens a new window.

The Guest List is also available as an eBook, downloadable audiobook and in large print.

3. Hidden Valley Road: Inside the Mind of An American Family by Robert Kolker

This is the true story of an American family with twelve children… six of whom were diagnosed with schizophrenia later in life. It’s a family saga, a tragedy, a story of hope – as well as a look into both the history and future of this devastating mental illness that remains extremely stigmatized in society. I read it in one night. It has the pace of a thriller but the insightful human tenderness of an author who cares a lot about the people he talks to. - Nancy Sheng, Associate Manager and guest on Episode 72: Best of 2020, opens a new window

4. Indians on Vacation by Thomas King

This is the story of Mimi and Bird and their adventures in Europe as they retrace the steps of Mimi’s uncle who documented his trip from almost a hundred years ago through postcards he sent home. Uncle Leroy disappeared with the family medicine bundle while travelling across Europe with a Wild West show. Some good laughs and a fun read while offering insights into Indigenous perspectives. - Pilar Martinez, Edmonton Public Library Chief Executive Officer and guest on Episode 53: EPL's COVID-19 Response, opens a new window

Indians on Vacation is also available as a downloadable audiobook, and eBook.

5. The Invisible Life of Addie LaRue by V.E. Schwab

Addie LaRue makes a deal with the darkness for more time on earth in exchange for her soul with the unforeseen cost that no one she meets will ever remember her. She makes her way through life for 300 years until one day in 2014 she meets a man in a bookshop who remembers her. A great mix of historical fiction, fantasy, and character study as the book explores what makes living worthwhile. - Beth Kilfoy, Collections Librarian and guest on Episode 60: EPL's Strangest Finds, opens a new window

The Invisible Life of Addie LaRue is also available as an eBook, downloadable audiobook and in large print.

Magdalena digs far beneath the rapidly aging stereotype of Colombia as a dangerous land of drug cartels. Instead, the country is portrayed through what he views to be its lifeblood – the Río Magdalena. Davis, a UBC anthropology professor and past National Geographic Explorer in Residence, imbues this book with fascinating stories of Colombia’s history (OK, drug cartels make some appearances), incredible biodiversity, and rich cultural heritage. Magdalena’s motif on the importance of ecological stewardship rings throughout and particularly as shared from generations of Indigenous people who have viewed protecting the Río Magdalena as a sacred and fundamental human duty. My husband and I had an incredible three week trip to Colombia in 2015, and this book brought back many great memories alongside a hope to return someday soon. Much, much more than just a book about a river! - Kyle Marshall, Branch Manager and guest on Episode 59: LGBTQ2S+ Reads, opens a new window

Magdalena: River of Dreams is also available as an eBook.

2020 was a big year for South Korean boy group BTS: they released two albums and a summer bop, topped the Billboard charts several times, and scored a Grammy nomination. From shattering streaming records to breaking barriers in the Western music industry, BTS has also broken some records here at EPL—during March Madness, the BTS Army was responsible for one of our most-engaged tweets from the @EPLdotCA Twitter account! While their Map of the Soul World Tour has been postponed, you can borrow and listen to their album here at EPL. - Carol Ma, Librarian (Discovery and Cataloguing) and guest on Episode 47 - 2000 Pop Culture Time Capsule, opens a new window

Map of the soul: 7 can also be streamed through hoopla.

8. One More for Christmas by Sarah Morgan

My favorite books are holiday themed (big surprise!) and Sarah Morgan always delivers a fun, heartfelt read featuring likeable, relatable characters and breathtaking Christmas settings. This 2020 holiday release takes the reader on a journey from New York to Scotland for the season and the family dynamics and the theme of forgiveness is something so many of us can relate to. A great five star read! - Jennifer Snow, writer and guest on Episode 71: Hallmark Christmas Movies

One More for Christmas is also available as an eBook.

As a kid of the 80's and 90's nothing brings a bigger smile to my face than playing old-school video games. Some of my favourites were the side-scrolling beat 'em up games like Double Dragon, Teenage Mutant Ninja Turtles and Streets of Rage. Imagine to my surprise that they not only released another Streets of Rage game this year but they also gave it the same look and feel as the original games. The storyline isn't exactly groundbreaking but if you're a fan of these types of games where your mission is to simply beat up the bad guy then you'll have a blast revisiting a more simple time in gaming. - Bryce Crittenden, Senior Marketing Consultant in the Marketing and Communications Division and co-host of Overdue Finds. Bryce's favourite episode of 2020 was Episode 64: Unsolved Mysteries, opens a new window

Streets of Rage 4 is also available on Playstation 4 and Nintendo Switch.

10. They Said This Would Be Fun by Eternity Martis

The author grew up in Toronto and attended Western University, where her experiences as a student were complicated and defined by the fact that she was one of only a few people of colour on campus. She dealt with racism on a daily basis in the classroom, in social situations, in relationships and beyond, and is painfully honest about how these injustices impacted her as a student and as a black woman trying to find her footing in adulthood. Martis' stories and perspectives are important and reinforce that Canada still has work to do to fully recognize and address its systemic racism. - Maria Milanowski, Library Assistant with epl2go Literacy Vans and guest on Episode 51: 2nd Annual Overdue Finds March Madness Preview, opens a new window

They Said This Would Be Fun is also available as an eBook and downloadable audiobook.

11. Time to Eat by Nadiya Hussain

This is my top non-fiction pick for 2020. Hussain was a guest on my top pick for new podcast, Home Cooking, hosted by Samin Nosrat and Hrishi Hirway (and she was the winner of the 2015 6th season of Great British Bake Off!). After listening, I watched both Nadiya and Samin’s TV shows and dived into their cookbooks. Nadiya’s Time to Eat has the most incredible but easy recipe for chicken shawarma THAT YOU CAN MAKE AT HOME! - Katherine Bateman, Library Assistant and worked behind the scenes on Episode 50 - Biggest Oscar Snubs, opens a new window

Time to Eat is also available as an eBook.

12. The Vanishing Half by Brit Bennett

I found this intergenerational story of twin sisters absolutely engrossing. It explores race and identity, as well as how others perceive us (and how those perceptions shape us), in a really poignant way. - Melanie St-Onge, Manager, Adult Services and City of Learners and guest on Episode 69 - The How to Festival, opens a new window

The Vanishing Half is also available as an eBook, audiobook CD, downloadable audiobook and in large print.

With a coffee table-esque book of photographs featuring her in bikinis while writing about body image, race, and society, comedian Nicole Byer (host of Netflix’s cooking show Nailed It!) shows that sometimes the bravest thing you can do is…be yourself. - Caroline Land, Branch Manager and co-host of Overdue Finds. Caroline's favourite episode of 2020 was Episode 70: Schitt's Creek, opens a new window.