In honour of Movember and to keep awareness of men's health initiatives alive even after the month is over we decided to share a bit of history and some great exemplars of masculine facial hair on the silver screen. Remember, there are no small roles, only small moustaches. 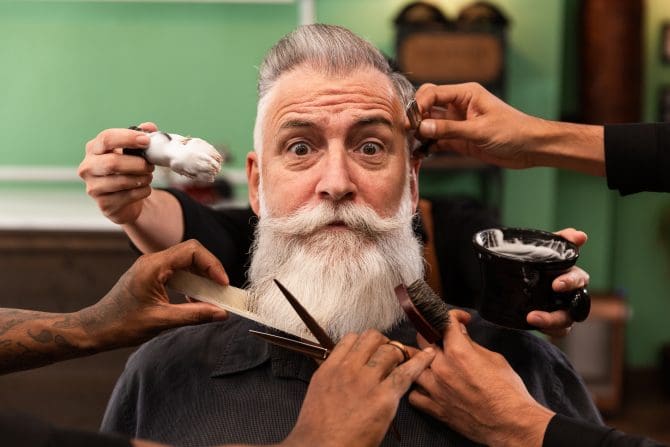 When one hears the word “moustache”, this is the one that probably comes to mind first, a thick stripe of fur taking up every inch of real estate between the upper lip and the nose. In comedy classics like A Night at the Opera, Groucho Marx became iconic for his facial hair, even though it started as a strip of grease paint smeared across a smoothly shaven face.

Arguably, the 1970s is when cinema really reached peak moustache. The hirsute icons of the New Hollywood gave us the picture-perfect facial manes of Robert Redford in Butch Cassidy and the Sundance Kid, Gene Hackman in The Conversation, and of course, Burt Reynolds in Smokey and the Bandit.

International cinema, too, displayed an appreciation for facial fur, none better than Swiss everyman Bruno Ganz in The American Friend, pale-faced with angst and ennui, but with a Germanic forest of avuncular bush making his hangdog brow instantly relatable.

As the turbulent 70s combed into the uneasy 80s, the face of the lovable Carl Weathers provided continuity and reassurance with a consistent and reassuring thicket of growth accompanying him throughout the first four Rocky films.

And in recent years, the admittedly uneven storytelling and tone of the second season of True Detective was indelibly boosted by Colin Farrell’s robust, 70s-looking caterpillar fuzz.

Bold and Beautiful: the Handlebar

The more angular, more aggressive cousin of the classic ‘stache, it takes a strong personality to pull this one off. Therefore, it should come as no surprise to see a handlebar prominently displayed by career tough guy Danny Trejo in nearly every role. Whether appearing as the go-to villain in one of many low-budget action films, or towering as the titular antihero in Machete, one look at those drooping handlebars, flanking the face like a pair of tattooed biceps, and you know Trejo means business.

In a movie as singularly bizarre as Zardoz, which sees a ponytailed and bikinied Sean Connery on an interdimensional space crusade of some kind (it’s a truly baffling film), we’re grateful for those handlebars creeping further down to the chin, covering up more skin than his wardrobe.

And despite the bristling of moustache purists, the thick forest of follicles adorned by Nick Offerman as Ron Swanson on Parks and Recreation is not only the perfect complement to his defiant, no-nonsense demeanor, but it dips astonishingly low past the corners of the mouth, embodying the spirit if not the letter of a regulation handlebar.

Sleek, Silly, and Sinister: the Pencil

Perhaps solely in the world of moustaches do thinner breadth and lighter footprint increase rather than diminish the level of frightfulness and revulsion.

At one time, the pencil moustache was an emblem of suave sophistication and boyish charm, and none was more adored or mimicked than Clark Gable’s self-assuredly minimal moustache in films like It Happened One Night.

On modern screens, the slighter the ‘stache, the more unhinged and untrustworthy must be the wearer. This is put to eerily good use by Benedict Cumberbatch as a loathsome figure with a lecherous lip brush in Atonement, and Clive Owen as a drug-addicted surgeon with a cowlick as unstable as his personality in the short-lived TV series The Knick.

Conversely, if it recedes to comically slight proportions, the pencil moustache can always elicit a hearty snicker, as with the outrageously thin and angular set of pipe cleaners on George Clooney’s face in O Brother, Where Art Thou?.

Tufts of Wisdom: the Walrus

Plucked straight from a 19th century tin-type photo, the walrus moustache brushes confidently past any concerns for what is hip or cool, plopping itself defiantly down the sides of the face with as much length and disarray as it pleases, like a wise old wizard letting his gown blow in the wind.

For decades, Wilford Brimley stood virtually alone in walrus country, a founding father to a nation of one. With the disarming presence of a small-town grandpa, his greying bristles brought a center of comfort to uneasy horror thrillers like Cocoon and The Thing.

Similarly, in the mockumentary This is Spinal Tap, the quiet and discrete dignity of heavy metal bassist Derek Smalls was given its perfect follicular expression in the stoical and enigmatic tufts of dark locks protruding from his face, enhancing the sage-like mystery of his countenance.

Today, Sam Elliott carries the walrus-shaped torch, his bottomless baritone voice and smooth Southern drawl flowing beneath the dense underbrush of his white whiskers like a grove of ancient Hickory sprouting astride the eternal Mississippi, bringing reassurance and stability in The Hero, or any film he graces with his facial mane.