We have some exciting news! As of Tuesday, Aug. 4, you can access even more in-person services such as computers, printing, faxing and more. Find out details about our expanded services and how to keep each other healthy at the Library. 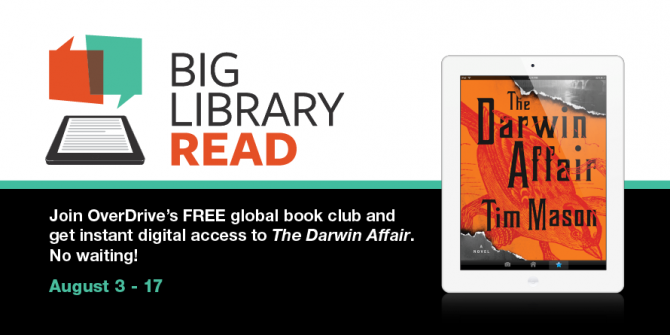 Take a journey back to 1860 London, England, when an assassination attempt is made on Queen Victoria and a petty thief is gruesomely murdered moments later, and only a block away. Chief Detective Inspector Charles Field quickly surmises that these crimes are connected to an even more sinister plot. Was Victoria really the assassin's target? Are those closest to the Crown hiding something? And who is this shadowy figure witnesses describe as having lifeless, coal-black eyes? Soon, Field's investigation exposes a shocking conspiracy in which the publication of Charles Darwin's On the Origin of Species sets off a string of murders, arson, kidnapping and the pursuit of a diabolical madman named the Chorister.

As the investigation takes Field from the dangerous alleyways of London to the hallowed halls of Oxford, the list of possible conspirators grows, and the body count escalates. And as he edges closer to the Chorister, he uncovers dark secrets that were meant to remain forever hidden. Help uncover the truth!

Tim Mason is an award-winning playwright and author. In addition to his dramatic plays, he wrote the book and lyrics for Dr. Seuss’s How the Grinch Stole Christmas! The Musical. He is also the author of one young adult novel, The Last Synapsid, published in 2009. The Darwin Affair is his first adult novel. Learn more about the author.

We’ll be hosting a Zoom book club meet-up on Thursday, August 13, at 7 p.m. to chat about The Darwin Affair. Check out more details about the meet-up and make sure to register.

You can also access a discussion guide for this Big Library Read and letter from the author.

Want more titles like The Darwin Affair? We’ve already created a read-alike list for you to enjoy. Here are a few titles to keep your investigation skills sharp before you read The Darwin Affair.

Walter Day's first case for the London Murder Squad sets him on a hunt for the depraved madman who killed one of their own detectives. Now, Walter's best chance for success lies with Dr. Bernard Kingsley, the Yard's brilliant forensic pathologist.

Immersing herself in her painting after the death of her anatomist husband, Lady Kiera Darby is ostracized by London society until her brother-in-law asks her to use her skills to help a local inquiry agent to solve a murder.

When Mary Russell meets famous detective Sherlock Holmes, she discovers that he is also a beekeeper. Soon she finds herself on the trail of kidnappers and discovers a plot to kill both Holmes and herself.